The Aerican Empire Post official postmark/cancellation saw light on April 27, 2015, it’s first 5 usages on a plain piece of paper going directly into the history books and becoming a Holy Grail for collectors all over the galaxy. It is said that a double rainbow and a glowing new star appeared in the heavens to herald the event thus forming the Pluricorn constellation which can be seen on a clear night sky from Northern Plutopia.

To untrained eyes, the postmark might look like the Empire’s famous Smiling Face, pictured from behind, while space enthusiasts will immediately see a solar eclipse, with the center circle being the planet passing in front of the shining (dotted circle) sun. However there is still no universally accepted definition of what it really represents thus encouraging the beholder to explore his imagination and find his own meaning. 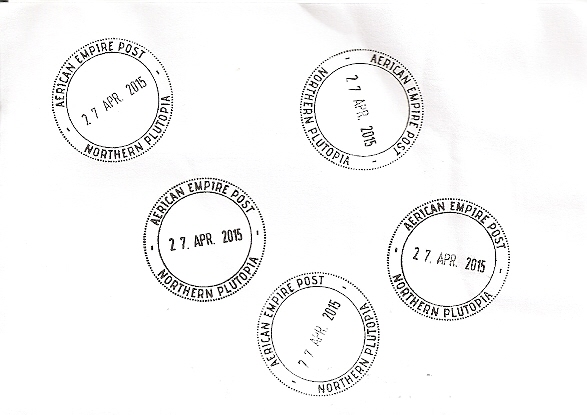